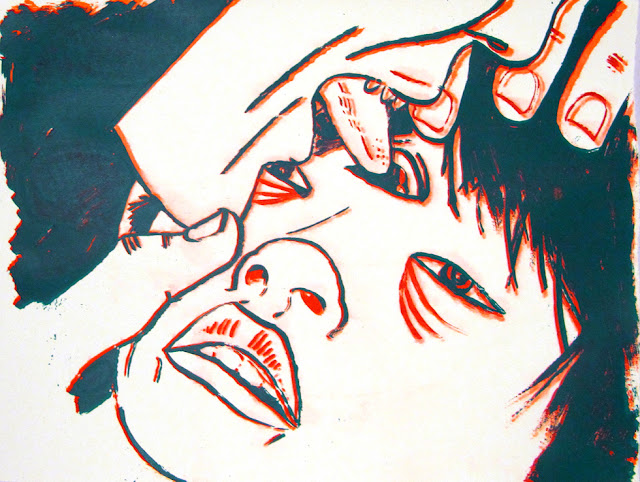 Andrea Sanders, 3 am Train to enlightenment

Q: Joe, can you tell us a little bit about the show you are curating at Kibbee Gallery next week.

A: Echoes gathers together thirteen artists who are working in the printmaking medium. It is a celebration of printmaking and the specific qualities it contains…
Q: What was the original idea behind organizing this show?
A: The initial idea came because I wanted to put together a book or a zine that would be a compilation of artists’ and poets’ work that, when combined together, would create a community displaying how people could coexist together in a creative, functional way... and also not be boring. That was about six years ago. That idea has formed into this group show. Books and galleries have very much in common, except that books are moving, portable galleries. Unlike a book, a gallery is less maneuverable, and yet… it’s like a stationary book with walls… and it’s also temporal.
Q: How did you choose the artists that will be in the group exhibition?
A: I knew I wanted the show to be all printmaking, so I looked to the Atlanta printmaking community first. There are so many good artists here in Atlanta, and I didn’t just want to ask anyone whose work I just felt was good. I have been thoughtful in selecting artists with a specific temperament so that when their work coexists in the show something new and interesting may emerge. Basically all of these artists not only care tremendously about what they create, but they also have the technical skills to pull off what they set out to do.
Q: Does the show’s title, Echoes, describe a common thread shared between the artist’s works that will be on view?
A: Mainly I just like the word. I think it works also because it is about repetition, which is a large part of the printmaking process. Also it is about sound and vibrations… and music is very important to me.
Q: I understand that you will also have some of your own prints in Kibbee next week. Can you tell me what those pieces are about?
A: Yes. I have two pieces in the show. They are about love, wounds, beauty, movement.
Q: Is this a theme you have been working with for a while now? And how has it changed/evolved over time?
A: Yes. I’m getting closer to what I want to portray every day. I want to create work that moves me…  moves people. If I keep working hard, by age ninety I will be able to create moving pictures.
Q: In just a few words, describe what one should expect to experience when viewing the Echoes exhibition.
A: Well, technically, the full title of the show is Echoes: Adventures in Printmaking. Expect not to be bored. I’d like to think of this show like an episode of 3-2-1 Contact if anyone remembers that PBS gem.

Email ThisBlogThis!Share to TwitterShare to FacebookShare to Pinterest
TRANSCENDENCE

Hope to see you all there!

Posted by Kibbee Gallery at 9:44 AM No comments:

Check out Hidden Man this month at
7 STAGES
a play about the life of Atlanta based artist Robert Sherer
March 8-25, 2012
Also, while you're in the neighborhood, stop by Kibbee Gallery
to see some of Robert Sherer's
Blood Works and American Pyrography on display. 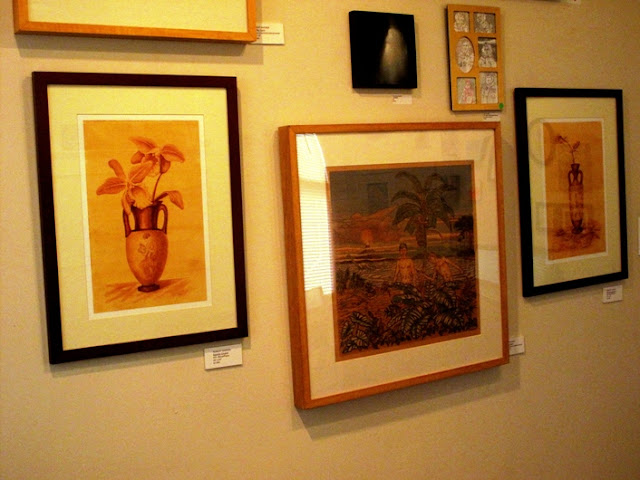 An Interview with Robert Sherer


Q: How many hours a week do you spend working in your studio?
A: If you combine the amount of time I spend conceptualizing with the time I spend creating the physical product, I spend on the average about 20 hours per week in the studio during the academic semesters.
When school is not in session I practically live in the studio.

Q: Do you have any special tools or devices unique to your creative process?
A:  Yes, for the Blood Works pictures I use hypodermic syringes, blood thinners, test tubes, hermetic containers, tourniquets and lots of Band-Aids.  And for the American Pyrograph pictures I use electric wood-burning tools, a micro torch, wood veneers, furniture stains and even more Band-Aids.

Q. Can you describe your process with the American Pyrography series?
A. Since the subject matter of the series concerns my youth in the 1970s, I derive my images from classic illustrations of the period.  I maintain a large digital library of source imagery that I use for props to accessorize my pictures.  The final maquette is an amalgamation of original drawing, derivation and cut-and-paste appropriation.  Once the drawing is mastered I then transfer it to a sheet of maple veneer to create the actual wood-burning.  I use an electric wood-burning tool to sear the linear aspects into the wood and then I use various wood stains to colorize the image.  I believe that using well-known camp craft materials and techniques adds an air of authenticity to the works. 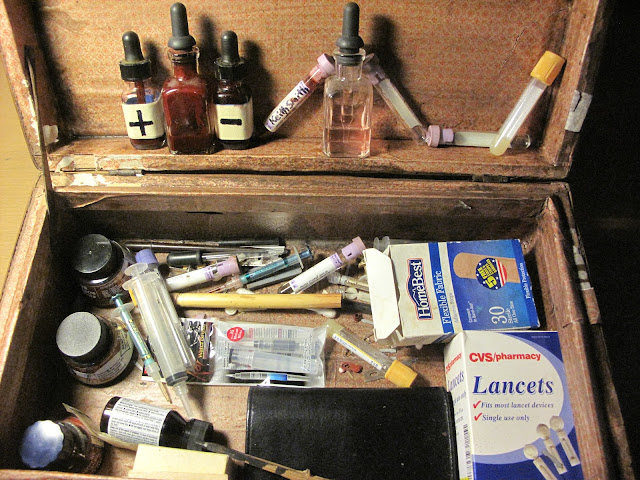 Q: Can you tell me a little bit about “Blood Works” and how you came to the idea to do such a powerful series?
A: Actually, the medium came first (due to an accident with an X-Acto razor blade) and then the ideas came afterward. What self-respecting artist wouldn’t want to make pictures from a jar of their own blood?

It, however, took me a long time to realize the profundity of the medium and the intense expressions that result from combining the blood of differing religions, races, genders, political stances, HIV statuses.

Q: What were you trying to elicit in the viewer with these works?
A: In the beginning I mostly just wallowed in the confrontational aspects of the medium and tried to shock people with the bloodiness of the blood.  I didn’t really see the bigger picture until people began to have strong emotional reactions and interpretations of the pieces.  It was only then that I began to understand the politics of blood: the sanguine identity of people; the juxtapositions and blending of peoples; and ultimately the consanguinity of all people.

Q: What projects are you currently working on?
A: Most of my time is being spent creating works for my solo show in August for Lyman-Eyer Gallery.  I am now also in emergency mode because I have just been informed that the Kennesaw State University Press will publish my Blood Works art book in July and there are still 8-10 new images from the new Blood Money series that I want in the book.

Q: Tell us about this new series.
A: The works are created from high-resolution images of Confederate currency.  I isolate details from the dollars and subvert them to reveal the hypocrisy, stupidity and evil of the Civil War South.  To underscore the subject matter the pictures are propped with racist ideas taught to me by my elders.  It is my hope that the artworks will make them feel betrayed by a “Son of the South”.

Q: Do you think it is important for artists to move to a major art community like NYC to make a name for them?
A: Yes, if you are an untalented trust fund baby I highly recommend that you move to NYC to buy an art career with your inheritance and family connections.  Otherwise, if you are like the rest of us, it really isn’t as important as it used to be.  I believe that history isn’t going to view the NYC art world nearly as favorably as some 20th Century dinosaurs might hope.  Really, how are we to take seriously a city that purports to be at the helm of showcasing American art while it steadfastly ignores almost all American art produced outside of its city limits?  Personally, I am not crazy about Regionalism and the homogenized look of a lot of New York art can immediately identify its origin within the neighborhood of Chelsea, Manhattan.  The city’s late-empire decadence put the lid on the coffin, and the Internet provided the nails because it is now possible for artists to develop substantial reputations for themselves without moving to the big city.

Q: How long have you been teaching art at a University level and do you think a formal education in art is important for an artist?
A: I taught for two years in Pennsylvania, two years at Atlanta College of Art and for eleven years at Kennesaw State University.  Personally, attending university was the best thing that ever happened to me.  In fact, I love it so much that I have dedicated my life to the academy.  But, being that one of the great influences on my life was a self-taught artist I cannot prescribe a formal art education for everyone.

Q: What aspect of your artwork would you say was influenced by your relationship with Howard Finster and your experience staying at Paradise Gardens?
A: Howard didn’t influence my artwork very much but he did teach me how to cope with loss and to live again.  During the time of our association I was dealing with a lot of serious personal issues, including notions of suicide resulting from the deaths of many of my friends.  The play Hidden Man revisits my time with Howard and it portrays my struggle with the voices the dead and the living vying for my attention.

Q: In what way do you think you may have influenced him?
A: It would be impossible and imprudent for me to speculate upon my possible influences on Howard Finster.  I can, however, say that he loved a lot of the ideas I expressed about the condition of being an artist, about the art world at large, and about our relationship with nature.  He especially appreciated that I had a formal art education and was enthusiastic to share art history with him.  I once brought a copy of Janson’s History of Art to Paradise Gardens and he almost drove me crazy with his questions about the history of art, as if he wanted me to explain the entire advent of man in a conversation.  He was a genuine autodidact with an insatiable appetite for knowledge.

Q: Do you have any advice for young budding artists of today’s generation?
A: Your most valuable possession is your time.  Stop wasting it on trivial matters such as amassing “friends”.  Life is not a popularity contest, especially for artists.

Learn to be selfish with your valuable time.  Our modern lives are filled with too much information, too many possible paths, too many unrealistic expectations, too many distractions, too much junk, etc.  It is impossible to keep up with it all.  Foolish people think that they can somehow do it all.  As a result, they become dabblers at many things and masters of nothing.

Q: If you could live multiple lifetimes, would you choose to be a visual artist again or would you try something else in the next life?
A. I really can’t answer this question with any degree of certainty because all I have ever known is the life of a visual artist.  My obsession with the visual realm is at the core of my being and is really all I would want to possess in any speculative future life.  I suppose in three or four lifetimes I might get a little tired of being a visual artist and would want to pursue being a polyglot, a novelist or pianist.

Posted by Kibbee Gallery at 5:33 PM No comments:

Posted by Kibbee Gallery at 7:55 PM No comments: